The last two data items in my weekly training reports are calories expended and average weight. These are two data points that I have started watching closely as my training for the 2014 season resumed on October 8, 2013. I expect to start burning a lot more calories as my workouts increase in length and intensity, and, consequently, I expect my weight to start dropping by roughly half a pound (1,750 C) per week.

Each off-season (October through March), my weight has invariably increased, with a gradual weight loss at the start of the race season (March through May). Then, my weight starts to increase again. Even exercising portion control did little to stem the weight increase during the 2013 race season. It is tied to the switch from aerobic endurance training to high-intensity sprint workouts.

EATING HEALTHY
In order to continue my weight loss towards my ideal racing weight, I made a fundamental shift in my diet in September 2013. My inspiration for this change in thinking was The Feed Zone Cookbook: Fast and Flavorful Food for Athletes, by Dr. Allen Lim and Biju Thomas. The authors have been cooking for and testing recipes with elite professional cyclists and their teams since 2004

I started cooking with fresh, whole, and organic (if available) ingredients, rather than eating packaged foods, like frozen meals. The recipes that I’ve already prepared have required simple ingredients, were easy to follow, were very flavorful, and were devoid of empty calories. I have even started fixing “portables,” the authors’ substitute for pre-packaged energy bars. These include rice cakes, baked eggs, two-bite pies, baked cakes, cookies, griddle cakes, pancakes, and a variety of other nutritious, homemade, fresh, bite-size snacks.

The charts below show my average monthly weight since September 2013. The second lighter colored line, that starts in March 2014, shows the lowest daily weight I attained each month. My ideal race weight is 150-155 pounds, which I will work to achieve in 2020.

NOTE 1: The dramatic weight loss in May-June 2016 was due to a bout of pneumonia immediately after successful gallbladder removal surgery on April 20, 2016. The equally dramatic weight gain in August-October 2016 was due to the recovery from pneumonia, the focus on anaerobic power workouts during the second half of the season, and a second hernia surgery on October 5, followed by four weeks off the bike, rather than the usual two weeks recovery at the end of the season. 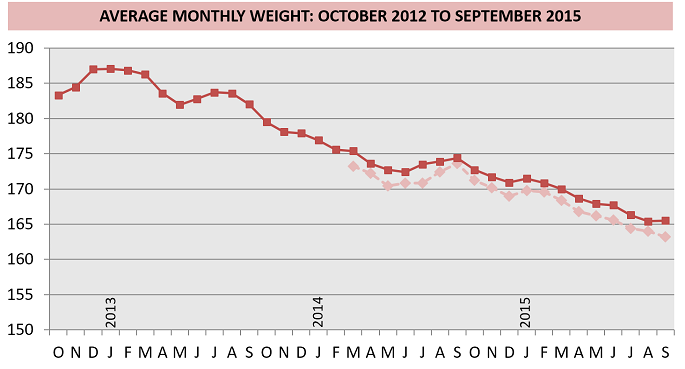 NOTE 2: The progressive weight gain in the last three months of 2019 were due to a combination of factors: 1) additional protein intake was unnecessary, with the excess being turned into fat, 2) prohibition on fatty foods, like red meat, diary, and chocolate, after gallbladder removal should have been permanent, and 3) long weekend training rides have been conducted at 70%+ MHR (117+ bpm), where I burn no fat for energy.

NOTE 3: There are is no accurate weight data for July or August 2021 due to my serious bike accident on Sunday, June 27, 2021. I spent three months in a combination of hospital intensive care and home health care. So, no daily weight data was recorded until September 2021. My average monthly weight for September was 142.4 pounds (lowest weight was 139.8 pounds), a 20 pound loss post-accident.

NOTE 4: I discovered that my scale had been “lying” to me since I returned home after my accident. Due to an uneven bathroom floor, my weight was lighter by 20 pounds. I have “corrected” my monthly average weight since October 2021 through September 2022.

WHAT I WON’T EAT
I’ve never acquired a taste for coffee or alcoholic beverages, so they are easy to avoid. I’ve avoided caffeinated beverages for many years now. But, I’ve now added pre-packaged fruit juices to that list, along with packaged meals, like frozen entrees. I no longer eat fast food or at sit-down restaurants. In 2013, I developed an intolerance for gluten and peanuts, so I avoid wheat and peanut products.

WHAT I WILL EAT
I drink filtered water, almond/oat milk, and fruit juices, like cranberry juice. I eat gluten-free pasta products. I make my own granola with old fashioned rolled oats, agave juice, slivered almonds, and dried fruit. I make “portables” with calrose (“sticky”) rice and a variety of ingredients, like ham and cheese. Lunches and dinners seldom take more than 30 minutes to prepare, and I make enough for leftovers. I’ve shifted my meat preferences from beef to chicken and fish.

WHAT’S SO IMPORTANT ABOUT DIET?
All of this effort to “eat healthy” is driven by the fact that competitive endurance athletes, whether professional or amateur, are constantly aware of their power-to-weight ratio. I’ve discovered that I gain a half mile per hour of maintainable speed for every six pounds I lose. Sensible weight loss is a combination of exercise and eating fewer calories, without losing muscle mass or compromising my health. The only answer is a diet of fresh, whole, organic, and homemade foods.