Are you fast enough?

When chatting with Masters-aged recreational cyclists about racing, the very first question I’m asked is “How fast do I have to go?” That’s an important question. There is a huge difference between a casual, two-hour, 15 mph average ride, that barely breaks a sweat, and a 20-25+ mph all-out effort for 15 minutes, 30 minutes, or an hour that leaves you gasping for breath afterwards.

And remember that speed is not the only factor that determines whether or not you’re competitive on race day. You can control several factors, such as your gear, training, and race fitness. But, there are a number of other factors that are outside your control:

So, all things being equal, how fast do you have to go?

For the Beginner competitive cyclist, just ride as fast you can go and still finish the race. Try to stay in an aerodynamic crouch over the handlebars and pedal in the biggest gear that you can maintain. Don’t start too fast, which is difficult the first time, because of the excitement factor.

For the Intermediate and Advanced racers, the following charts show the average speed of the podium finishers in Masters age-groups at the local, state, regional, and national time trial races that I entered during 2017. 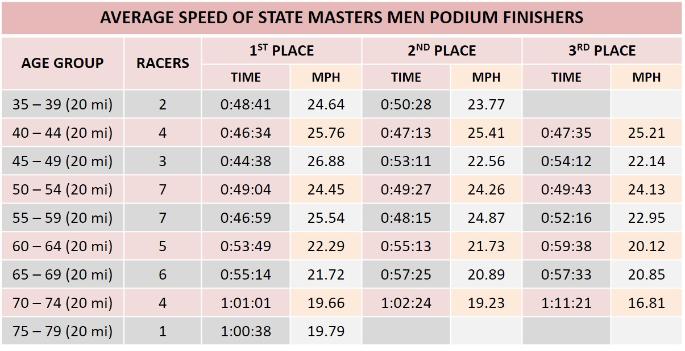 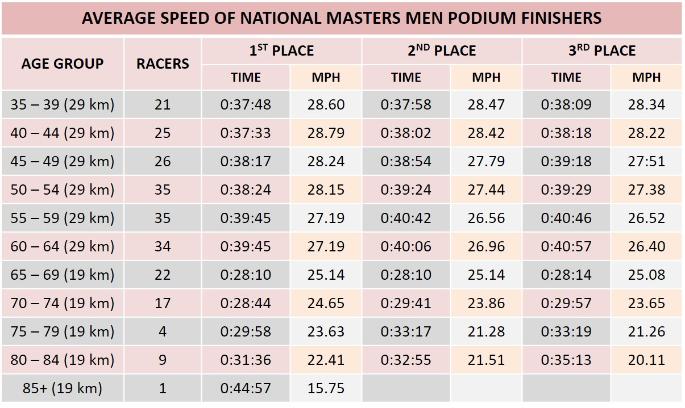 SUMMARY
Being fast enough to finish on the podium in a Masters age-group race, whether at the state, regional, or national level is only, in rare cases, the result of pure natural ability. To maintain speeds in excess of 20 mph for half an hour to an hour requires several years of training encompassing thousands of training miles each year.

Have questions about racing?

Not sure if you can be competitive at your age? Have questions or concerns about any aspect of racing at the local, state, regional, or national level? Chances are pretty good that I’ve faced the same challenges during the last 20+ years of training and racing.