How fit are you really?

According to Joe Friel, multiple Masters champion and best-selling author of more than a dozen books for athletes: “Science tells us there are three physiological predictors of your endurance performance that holds true across the aging spectrum: aerobic capacity, lactate threshold, and economy.” Let’s take a brief look at each one.

Your body’s capacity to transport and use oxygen during exercise (VO2max) is the most precise measure of overall cardiovascular fitness. The only way to measure your VO2max is at a testing facility.

This is not something you can do with your home trainer and bike computer. You will ride a stationary bike during 15-20 minutes of gradually increasing resistance until exhaustion. You will wear a face mask. The volume and gas concentrations of inspired and expired air is measured. 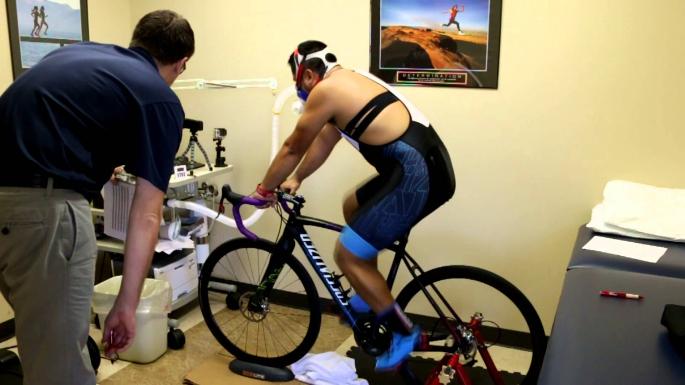 Most fitness centers either have the equipment to perform a VO2max test, or will direct you to a local testing facility. You can also check with a local university to see if they have a Sports Lab that offers testing. A VO2max test typically costs between $100 and $200 and takes one hour.

In the meantime, scroll to the bottom of this page for a link to an online questionnaire to estimate your fitness level based on the extensive research of over 6 million healthy individuals worldwide by The K. G. Jebsen Center of Exercise in Medicine at the Norwegian University of Science and Technology. (My latest fitness level assessment showed my fitness age as 34 years old – several decades younger than my chronological age – with an estimated VO2max score of 50.)

Another benefit of having a VO2max test is that it will give you a precise measure of your heart rate ranges for training and racing. Ignore the formula to subtract your age from 220 to calculate your maximum heart rate. You are an “experiment of one.” 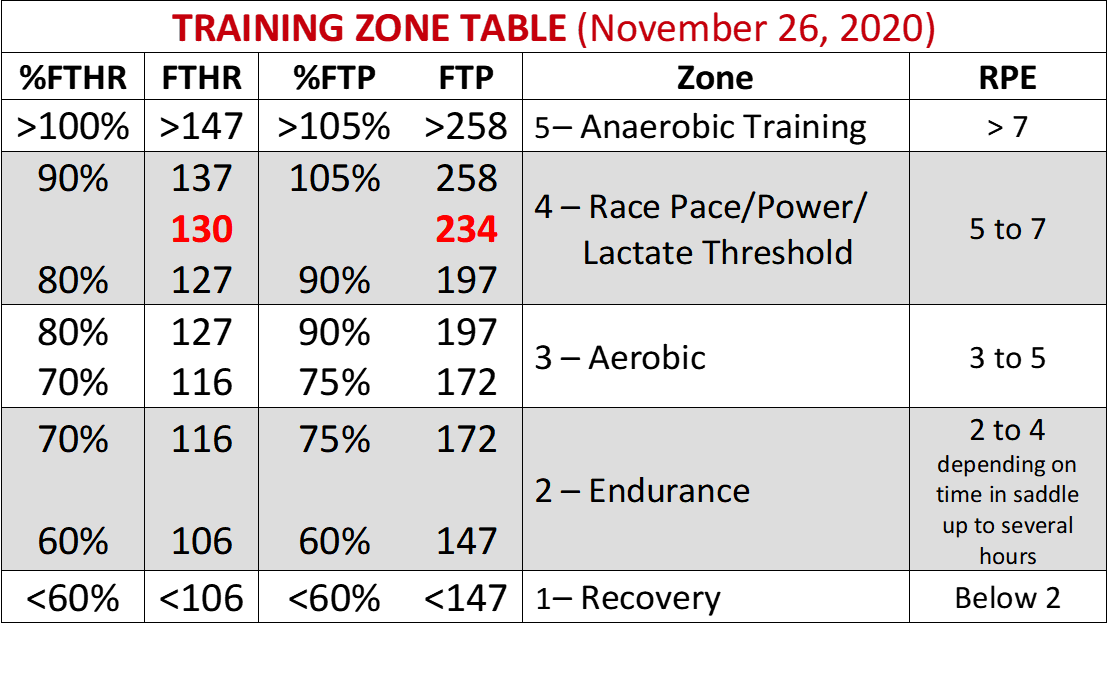 The FTP numbers on the Training Zone Table above were determined with a self-administered FTP test. You can perform this test on your trainer with some method of recording watts during the test. I’ve used a Wahoo Fitness Kickr power trainer, though, there are similar (and cheaper) power trainers available. You can also install crank arms or pedals with power meters embedded that can communicate with a bike computer or smartphone. Unfortunately, power meters are expensive. My power trainer cost roughly $1,100. The Garmin Vector 3 pedals that I have on my race bike cost me another $1,000.

I perform at least two FTP tests every season. The first test is conducted at the end of my first month of training at the start of a new season. The second test is conducted after my first “A” race, in the middle of the season. Here is the script for an FTP test. There are two maximum efforts of five minutes and 20 minutes after an extensive warmup.

The value of knowing your power numbers is that they are much more precise than relying on heart rate when training and racing.

The third physiological predictor of your endurance performance is economy. Friel says “We know less about economy than about aerobic capacity and lactate threshold, but it may be the most important of the three.”

According to Friel, “It has to do with how efficiently you use oxygen while exercising,” There is also a genetic component, and age also affects economy. Continues Friel, “…the longer you’ve been seriously training in your sport, the more economical you are likely to have become.”

So, how do you become more economical? What can you control? The most obvious factors for a competitive cyclist are reducing excess body weight, using lighter and more aerodynamic equipment, and using high-intensity, rather than low-intensity, training. In an ironic twist, Friel reports that a very high VO2max and excellent economy have never been reported to co-occur in the same athlete, at least among the many elite athletes who have been studied. It remains to be seen if amateur competitive cyclists are similarly affected.

Estimate your current fitness level with a simple questionnaire based on the extensive research by The K. G. Jebsen Center of Exercise in Medicine at the Norwegian University of Science and Technology.