Tip #10: What’s the right balance of carbs, fats, and proteins?

Obesity levels for the senior population in the U.S. are now over 40 percent. If you are a former high school/college/post-college athlete who has been on the couch for the past 20-30+ years, this series of twice-monthly tips will show you how to resume an active lifestyle.

What's the right balance of carbs, fats, and proteins?

The current thinking among sports nutritionists is a diet composed of 60% carbs, 20% fat, and 20% protein. Other experts advocate a more balanced diet with 40% carbs, 30% fat, and 30% protein. Both approaches are wrong according to Asker Jeukendrup, Ph.D, an exercise physiologist at the University of Birmingham in England and one of the world’s leading experts on the effects of different amounts of carbohydrate and protein intake on endurance performance.

“Percentages are meaningless, because it is the absolute amount of carbohydrate and protein that matters. How much you need depends on your goals and the amount of training you do.”

So what are the right amounts? “Typically,” says Jeukendrup, “carbohydrate needs will vary from 5 to 10 grams per kilogram of body weight (1 kilogram equals 2.2 pounds) per day with training ranging from one hour per day to five hours or more.”

Unlike protein and fat, carbs are not used structurally in the body—they are used strictly for fuel. Therefore, the more active you are, the more carbohydrates you need, with the hardest training athletes requiring twice as much carbohydrates as the lightest athletes. Studies have shown that athletes who fail to increase their carbohydrate intake sufficiently to match increases in their training volume do not perform as well.

Protein needs also vary with training volume, although somewhat less. Traditional recommendations are 1 gram of protein per body weight daily for recreational endurance athletes increasing to 1.5 grams per kilogram per day for serious competitors. But in a recent study, Jeukendrup found that going all the way up to 3 grams per kilogram per day helped a group of elite cyclists to better handle the stress of an especially hard block of training. This is an extreme case, but it demonstrates that the carbohydrate and protein recommendations for athletes should be considered minimums. It’s OK and sometimes beneficial to get more, as long as doing so doesn’t cause you to consume too many total calories.

And fat? Dietary fat needs are less sensitive to fluctuations in training volume. According to Jeukendrup, you can trust that your fat needs will be met if you get the right amount of carbs and protein and simply let fat account for the remainder of your daily energy needs.

Following Dr. Jeukendrup’s recommendations, I need 113 grams of protein and 375 grams of carbs daily. Here is a snapshot of my typical daily food intake. 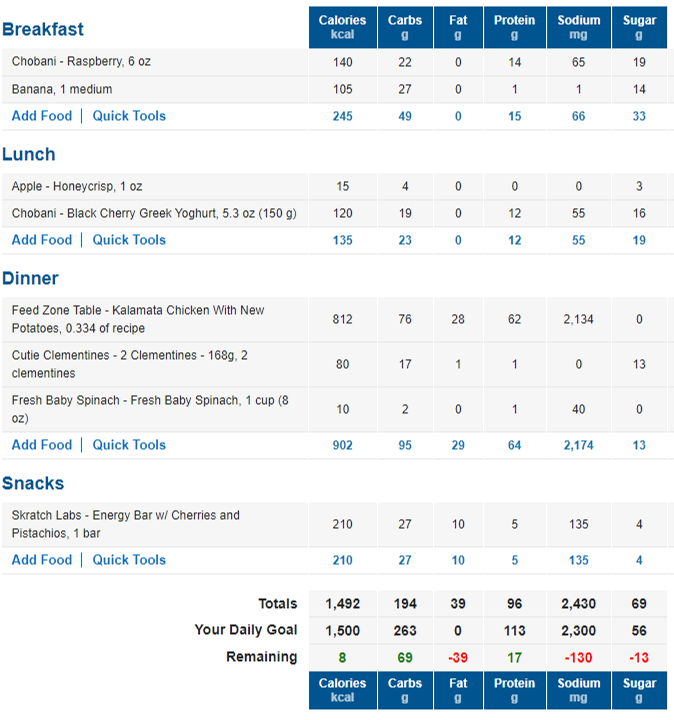 I decided to reduce my carb intake to stay within my daily calorie goal of 1,500. As a result, my diet is 51% carbs, 26% protein, and 23% fat, close to the recommendations of sports nutritionists.

Tip #11 Preview: How many carbs do you need daily?