Obesity levels for the senior population in the U.S. are now over 40 percent. If you are a former high school/college/post-college athlete who has been on the couch for the past 20-30+ years, this series of twice-monthly tips will show you how to resume an active lifestyle.

It depends on the following:

If there are no barriers in your life to competing, it is never too late to start. According to an article titledBecome An Athlete in Your 40’s & 50’s – It’s Not Too Lateby Jonathan Cawte, “Peak performance does not decline in a linear fashion. It is gradual. Followed by a rapid drop off late in life.” He continues, “The research into the health of masters athletes reflects the aim that many of us gave: maximize the ‘healthspan’ by reaching a peak and then maintain our health, physical and cognitive capacities for as long as we can, compressing ill health into as short a period as possible.” 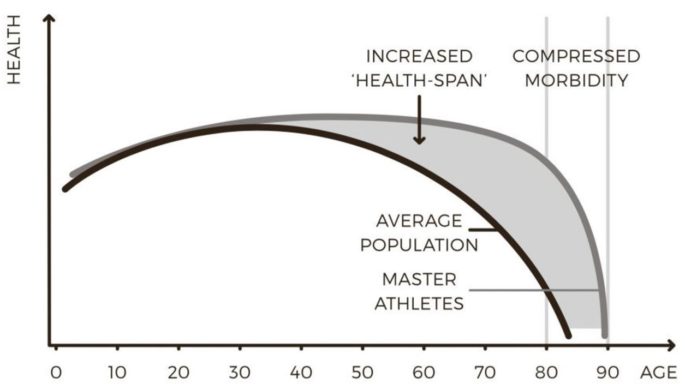 According to Coach Chris Carmichael, who is a cyclist in his mid-50s and spends a lot of time riding with athletes up to 30 years younger and 25 years older than him, there are four principles to consider if you want to compete later in life:

When I switched from running to cycling 20+ years ago, I had a vague idea of the healthy consequences of daily exercise and an active lifestyle. I knew I felt better, had more vigor and enthusiasm for life, and started to see my weight return to healthier levels. What I didn’t know was that I was literally “turning back the clock.”

I’ve discussed the concept of “fitness age” in Tip #4 – What’s your current fitness age? What I didn’t mention was that the only medication I’m taking is an over-the-counter 81mg “baby” aspirin daily. That’s it, period. I’ve lived all my life with a debilitating form of arthritis without the need for any medication. I currently use nightly yoga exercises, as well as my regular training, to mitigate the effects of the disease.

As for my ability to compete over the past 20+ years, I’m a couple of miles-per-hour slower now, but I’m still competitive at the local, state, regional, and national levels with average speeds of 23+ mph and maximum speeds approaching 40 mph. Interestingly, while the number of my competitors has shrunk, the speed of my Masters age-group podium finishers still exceeds 25+ mph average.

Tip #15 Preview: If you want to compete, how fast do you have to go?