Tip #17: How do you train like an athlete again?

Obesity levels for the senior population in the U.S. are now over 40 percent. If you are a former high school/college/post-college athlete who has been on the couch for the past 20-30+ years, this series of twice-monthly (1st and 15th of the month) tips will show you how to resume an active lifestyle.

If you competed in competitive sports in high school or college, you may still have a good idea of what training involves. But, since it has been years since you last competed, here is a refresher on the basics. An ideal training plan, which is scientific, structured, and progressive, will balance the following:

There are plenty of qualified coaches/personal trainers available to help you create a personalized training plan. They will structure your plan around the 10 Commandments of Training:

On a personal level, you need to develop patience and humility. It will probably take years to achieve your goals. My first race victory came at the end of four years of training and racing. And, I learned early that there is always somebody faster at the next level. You may not meet him/her at the local or state level, but you will most certainly be racing against them at the national or world championship level, if that is your goal.

My earliest recollection of training was my high school cross-country coach sitting under a tree chain-smoking cigarettes while we ran multiple hill intervals. We called his training method, “PTA” (Pain, Torture, Agony). He was, after all, one of the science teachers, not a qualified coach or personal trainer. I was so disillusioned by that experience in my junior year that I refused to participate in cross-country or track during my senior year. I continued running, nevertheless, on my own after school.

During college, I continued running and developed personal training plans from several running magazine articles in order to compete in local races. (This predates the internet by a decade or more.) I had no interest in competing for my college’s teams. I did have a classmate as a training partner who also competed. Neither of us had the money or the results to even think about approaching a personal coach. That was the case for the next 30 years, long after competing was no longer realistic.

When I switched to cycling at age 50, I initially turned to cycling magazines and the internet for tips on training to be a competitive cyclist. A lot of the training plans were goal-specific, such as ride your first century, your first time trial, or first road race. They were time-specific, 8-12 weeks, as well. That was good enough for competing in a couple of road races or criteriums each season. I even raced a century at the end of the season.

When I switched to time trials, I already knew that training for each race discipline required a different focus on strength, endurance, and intensity. So, I turned to the internet for a time trial-specific coach. I found Coach Mick Cooper in the UK in 2013. He built an annual training plan for me and sent me a schedule of daily workouts every four weeks.

He helped me win my first time trial at my 26th race. Since then, I’ve won 25 races at the local, state, and regional levels and have been on the podium 53 times out of 91 races.

When Coach Cooper retired in September 2019, I quickly turned to another time trial-specific coach, Gary Tingley in San Diego, CA, to help me win a national age-group championship over the next several years. To start, Coach Tingley built an annual training plan for me based on my race schedule and goals. 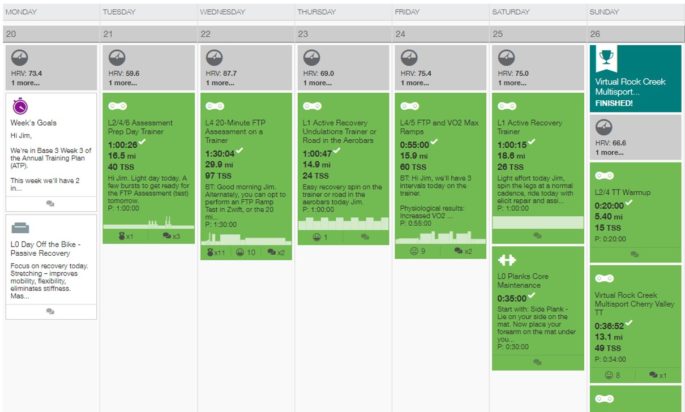 He then delivers my weekly workout schedule online that allows him to adjust my plan quickly based on my workout and race results. With an emphasis on power-based training, I’ve already increased my average race speed from 21-22 mph to 23+ mph.

Tip #18 Preview: What are the guidelines for your cardio activity?